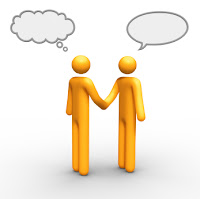 Last year I made a commitment to attend at least 3 networking events a month. Sometimes I had to really drag myself out of the door and often once I got to the event, it seemed like a colossal waste of time. BUT I recently found out that you NEVER  know what one seemingly wasted networking event can lead to.
Case in point: Last year I started receiving a series of emails about an inaugural networking event. I did not know the person who had sent them but it seemed like we had connections in common and since I had made the determination to attend as many new events as possible, I decided to sign up. It was one of those events where we sat around a table and introduced ourselves and our businesses and talked about what we needed/wanted.
As with many brand new ventures, it was a little disorganized, the vibe was a little stilted and the experience and professionalism of the attendees varied greatly. I had arrived a little late and had to leave early to attend another event so I didn't really get to talk to anyone one on one. I remembered thinking it was crazy of me to have gone and that it had totally not been worth it. About 4 months later, I received an email from one of the attendees. He worked for the large financial service organization that had hosted this networking event and wanted to talk about hiring me to help him with his presentation skills. We spoke on the phone and after I told him how I worked and more about what I offer, he suggested putting me in touch with his superior about having his division hire me to do a staff training. I reached out to his superior who seemed interested and said he would talk to HIS colleagues. Nothing happened for awhile but I continued to check in with him from time to time. By about the third time I reached out, he told me that he'd like me to connect with his colleague who was in charge of organizing training calls for a larger group of financial professionals. This was now about 6 months after the networking event. After a series of phone calls with this other person, I was scheduled to be a guest speaker on a training phone call for his group. He was so impressed with my delivery that he put me in touch with the head of training for the entire United States organization. Last month, I met with the head of training and I was recently hired to do three presentations at three of their conferences with the idea of having me be their go-to communications skills trainer! And it all happened because I sat across the room from someone at a networking event. BUT there are THREE other important lessons to be learned from this experience:
So, remember: networking pays! But HOW you network and how you follow through pays BIG!
Posted by Unknown at 12:17 PM