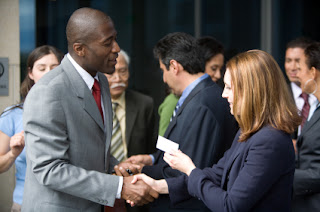 With fall comes many more opportunities to network!

What picture just came into your mind when you read that?  Did you picture walking around a room with a handful of business cards and stopping every 4 or 5 minutes to give your elevator pitch to a perfect stranger?
DELETE THAT PICTURE!

99.9% of all of my business comes from networking. But the type of networking that leads to business for me is this: walking into a room, feeling confident and happy to be there; approaching and/or being approached by an individual and engaging that individual in a conversation. Of course I will talk about my business at some point but I will concentrate on being engaging, interesting and interested in my listener first. If there is an opportunity for them to land me business it will reveal itself (or not) Sometimes that doesn't happen till months, years later. I recently landed business based on a recommendation from someone who I don't even remember having met!

Here are a few of my Rules of Engagement for Networking:
If you want to learn more networking tips, check out some of my other blog posts on networking.
Posted by Unknown at 7:05 PM No comments:

Email ThisBlogThis!Share to TwitterShare to FacebookShare to Pinterest
Labels: engaging at networking events, how to network, networking, networking tips

The Shame That Bonds

When my friend Amy Ferris asked me to contribute to an anthology about shame, (Dancing at the Shame Prom, Seal Press) I hesitated for a moment and then said “Sure, I’d love to”. Not because I was dying to write about shame… I was NOT! For one thing, I had a 20-year old son who got embarrassed if I said two words to a neighbor in the elevator, how could I write about shame without totally humiliating him?  But I said yes for two reasons. 1) It would be difficult and foolish to say no to Amy because I respect her tremendously and felt so honored that she had asked me, and 2) because I  believe there’s something to be learned in saying yes to something you desperately want to say no to. And I was ashamed of having shame and afraid of having to reveal it which meant there was something to be learned.  And I was right. I learned that writing about shame has the power to free and to bond. It frees the writer from chains and barriers that have kept them hidden and small, and bonds them to other people who share similar shame and may not have the courage or the outlet to talk about it.