Stepping in to What You've Honed 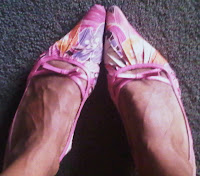 What a pair of shoes taught me!

I recently coined the expression, Own it While Who Hone it, and based on the amount of retweets I get, that phrase seems to resonate with a lot of people.  A few weeks ago while getting complimented on one of my favorite pairs of shoes, I realized that those shoes literally exemplify the act of me owning while I honed.

First a confession: I’m a Sale-aholic. The words “Marked down”  “On Sale” and “Discount Store” are like crack Cocaine to me.
I bought the afore mentioned shoes pictured on the left several years ago. I was in one of my favorite close-out stores, National Wholesale Liquidators, which has since “closed out” its Manhattan location. (To this day, it’s hard for me to go to lower Broadway without becoming filled with grief.) But I digress. These shoes had been carelessly tossed in a bin with other designer shoes. I picked them up and thought “wow, these are cute. “but soooo not me” I tried them on anyway. They fit perfectly and there was something really hot about them, but they were “SO not me” For business wear, I tended to go more “traditional” and classic.  “when and where would I ever wear these shoes”  Then I looked at the price and my sale addiction kicked in and I thought, at this price! I can’t NOT get them…” I brought them home and hid them in my closet. Months went by. One lovely summer day, I needed to go to an interview for a volunteer position; one that I was ambivalent about accepting. So I decided that, since no one there knew me, I would try on a slightly different persona – a persona that was comfortable wearing those shoes. It felt great! I LOVED being that person. (I was approved and wound up accepting the volunteer position) That might have been the end of the story.

However, the day of my shoe debut, I had called a friend who has known me for a very long time. We met for a quick coffee after the interview. She didn’t comment on my shoes one way or another. Of course, since I was still unsure about this new persona I was trying on, I took her lack of commenting as a negative.( go figure!)  I put the shoes back in my closet and did not take them out again for SIX YEARS!!! I kid you not!
SIX YEARS went by with me glancing at the shoes from time to time and wondering why on earth I had bought them, why I was keeping them and most importantly would I EVER wear them again.
Read more »
Posted by Unknown at 11:11 PM 2 comments: