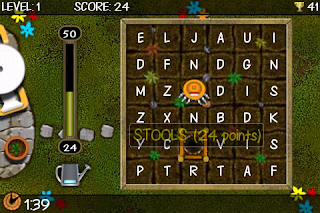 I recently hired a business coach. Something I had resisted doing for some time. I resisted for several reasons ; I didn’t trust it was worth the money; what if the one I choose wasn’t the “right” one; and ultimately, I resisted because I felt; I SHOULD be able to do this by myself and involving someone else in my business would feel too uncomfortable and might get messy! Now I know from my many years of training (and life) that messiness and discomfort are a part of growth. Heck, I teach it myself! But it’s still a hard concept to embrace. That’s why it was enlightening to get a concrete, literal lesson from an unexpected source – a smart phone game called Word Mole.


I was standing on the restroom line to a screening recently playing a game on my Blackberry when a stranger asked me if I was playing Word Mole. I wasn’t’. She said something about being obsessed by Word Mole, a stall opened up and that was the end of the conversation. However, curious and competitive as I am, I went back to my seat and started to explore Word Mole. I had tried it before but couldn’t figure out how to get it to work. Now I was determined. I finally figured out the logistics and thus began my decent into utter frustration. For those of you who haven’t been sucked in, Word Mole is a game where you are given a “garden” full of letters and have to make as many words as you can within a certain amount of time. You get points for the words you make and of course the more letters in the word, the more points. HOWEVER, the rules state that you are supposed to use letters that are connected to each other in some way. IF you don’t use letters that are connected, a mole comes out and creates a hole in your garden where no letters can grow until you use a letter next to the mole hole. Got it? So, I diligently worked my garden creating what words I could find. It was painful. First of all, they give you precious few vowels so with time clicking away, anxiety would set in and my mind would go blank as I tried to create point rich words and still have each letter touching another. Time after time I had to settle for cheap 3 and four letter words. “ran” “That” “dig.” “Sex” was a good one cause the “X” was worth extra points. If you manage to rack up 50 points in 2 minutes you get to go to the next level But each subsequent level requires you to earn 10 more points in the same amount of time! More anxiety! With my baby words, I would sometimes make it to the next level, but seldom to the level after that. WHY? Because I was determined to play only by the strictest of the rules! The alternative, of having a mole dig a hole in my garden seemed untenable! Whenever this would happen inadvertently, I freaked out and spent gobs of extra time looking for ways that I could repair the hole. I didn’t care how much harder doing it “by the rules” was. I was determined to beat the game while creating the least amount of messiness. (Not only was I determined to do it “by the rules”, I refused to succumb to “cheating” by looking for hints or tips on line.)

Then one day I saw an opportunity to form a juicy 6 letter word . it required using a letter very much not connected to any other letters I was using – AND (Palms sweating) I DID IT! That word was worth so many points that I instantly advanced to the next level. And guess what? The sky didn’t fall! Hmmm… What did this mean? Then, desperate to finish the new harder level and advance, I again experimented with recklessly creating mole holes in my garden. Sometimes I had as many as 3 holes at a time before I could fill them up and nothing bad happened! I was advancing further and further. I actually was able to complete a “Season” and was invited to start another Season. I didn’t even know there were Seasons! So what was the lesson learned? You’ve probably figured it out.

In business and in life, we often continue to do things according to rules that we make up and enforce upon ourselves. Those rules are often rules that keep us feeling safe; rules that lessens any messiness or discomfort. We also tend to ignore the fact that playing by those rules and feeling morally superior by not “cheating” (read asking for help) can create senseless anxiety. Exactly like my experience with Word Mole. The rules never said: DO NOT CREATE HOLES. The rules merely said that creating holes caused consequences but there are ways to deal with those consequences. What I learned was that by creating those consequences, I was able to achieve better results. I’m hoping that my experience with my business coach will reinforce that lesson. And my advice to you: experiment with creating holes in your garden. Who knows what it could lead to.
Posted by Unknown at 9:33 AM No comments: Links to this post