Meetings: Can They SEE What You're Saying? 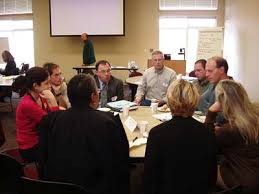 Ralph Waldo Emerson wrote “What you do speaks so loud that I cannot hear what you say.”

How true! Because we humans still possess remnants of our old reptilian brains - the part of the brain that deals with instinct, our first reaction to people or situations is usually based on visual cues. Given the choice between visual and verbal information, our brains will believe the visual over the verbal. That is why it is so important to be acutely aware of behavior that will send the wrong message.

This was clear to me at a meeting I once attended. The meeting was being conducted by high level administrators of a city agency, Agency A. The purpose of the meeting was to introduce information about a program that was being instituted to ease friction between Agency A and another agency, Agency B. Agency A has always been perceived as being in the position of power and has usually communicated with Agency B in an authoritarian and judgmental manner. On the dais in the front of the room sat five high level administrators from Agency A. Crowded around in a u-shaped table arrangement were about 30 plus staffers from Agency B. Tension was high. Old baggage filled the air. The new initiative was unclear to some, suspect to others. I was in charge of creating a training module to help make communication between these two agencies more effective. What I saw made me realize that my task would be an uphill climb. As one of the administrators proceeded to speak, I observed several things he “did” loudly that made what he “said” difficult to hear.

Problem 1: The gentleman was leaning very far back with one arm draped over the back of his chair. My instinctual brain read that posture as being aloof, uncaring and much too casual.
Fix: A more effective position would have been to sit slightly forward with his chest/ “heart center” open and directed toward his listeners showing interest and openness.

Problem 2: His eyes were either on his paper or on one or two spots in the back of the room.
Fix: Since the listeners were spread out in a u-shape all around him, it would have been more effective to scan the room, giving 5-10 seconds of eye contact to each section of the audience.

Problem 3: Most egregious of all – HE WASCHEWING GUM! As he laid out the new policies for improved relationships between the agencies, he was performing an activity that most teachers and parents drummed into us as being the height of rudeness. I could only imagine how instinctively turned-off some of the staffers from Agency B must have felt.
Fix: If you don’t know, ask your mom!

In addition to the visual cues, the vocal cues were not much better.

Problem 4: He spoke in a slow low pitched monotone.
Fix: Vary your vocal pitch, rhythm and volume. There is musicality in the English language. Find it. The sound and tone of your voice is the second most important factor in delivering effective communication.

Problem 5: He used language riddled with jargon.
Fix: Even if you believe 99% of the people in the room understand your acronyms and jargon, spend some time breaking it down for the 1% who may not.

Was this a rude, uncaring, arrogant man? Or was he a man unaware of how loudly his behavior was speaking? I eventually learned that he was the latter- a tech savvy, hard-working individual with good intentions and poor presentation skills.

However, it can take as many as 12 encounters to undo a negative first impression. Not too many people are going to be willing to give anyone 12 chances to change their opinion. In this day and age, with opportunities for face to face communication becoming rarer and rarer, it’s time for all of us to become more aware of the things we are doing that drown out the things we are saying
Posted by Unknown at 6:45 PM 1 comment: