On Your Mark, Get Set, PUNDIT! 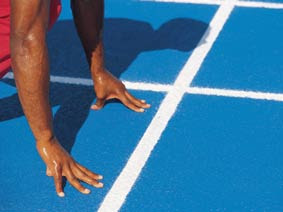 The Washington Post ran an America’s Next Great Pundit contest. Check it out! www.washingtonpost.com/pundit
When I looked at pictures of the two finalists I immediately had a bias. One was a white male, the other a woman of color. I thought to myself, I could cast my vote right now. After all we don’t we have more than enough, young-ish white males throwing around their views and opinions? But I wanted to be fair and I know that you can’t judge a pundit by its headshot. So I went through and read a bunch of the blogs, Op-eds and Q&A’s that these two pundit wannabe’s had posted.

The writing by our two finalists was fine, but to me, the woman of color, Zeba Khan, seemed to have a huge breadth of knowledge and opinions and covered a wide array of topics. She had a very clear and sophisticated, no nonsense style and though she was criticized for not being engaging enough, her writing reflected a lot of self –reflection and unique ideas. The male contestant, to me, relied on wit, sarcasm and glibness to such an extent that he obfuscated his actual opinion. I came away from reading his pieces thinking, “but what does he really think?” I get enough confusing messages from my friends, family and the media. I don’t need any more mixed messages, thank you very much.

I also watched a video interview with the last three pundits standing. Since I’m so all about presentation that was really important to me. I was surprised to see that the recently eliminated third runner up, Courtney Martin, was someone whom I’ve met a couple of times and is a friend of a good friend. She’s a great young feminist writer but fell a little short on the relate-ability scale.

But let’s go to the videotape. In my opinion, the interviewer/host from the Washington Post, did not do that great of a job with his questioning. Lots of ums and uhs and many of the questions were too long and too shallow. There was a separate video where the host gave each of the three contestants feedback. I have to point out my favorite part of that was the fact that before he commented on their performance, he repeated a version of my mantra - that in television it’s not just what you say but how you look and sound when you say it.

So how did they look and sound? To be honest, none of the three wishful pundits were very engaging or interesting to me. Kevin Huffman, our guy, came across as someone who deserved to be there. He wore a slightly smug smile and used effective body language (sitting very upright, legs apart, not crossed - taking up a lot of space. Hands in lap - tented not folded. He kept his answers short which made them seem weightier than they actually were. He also used a vocal tone that said I know what I’m talking about and I don’t really care if you agree with me or not. Very pundit-esque.

Both of the women had legs crossed and hands folded like good school girls. They gave thoughtful, if more wordy comments, so the host interrupted them more often than he did the male. They breathed a little less frequently which communicates a kind of anxiety to get a point across. And - I have to say- Courtney could really use my vocal workout CD. She has that higher pitched “Younger Generation” voice that is a tad nasal and can be very grating on the ear and can also be hard to take seriously.

Zeba, on the other hand, though her voice was on the high side, it had some resonance to it and she spoke with a tone of authority. She sounded earnest, thoughtful and had a great weight about her answers. (The host thought she should smile more and I kind of agree but I believe that people’s presentation style should be true to their natures and Zeba has a no-nonsense way about her which is in itself engaging. So who did I vote for? I went with my original gut choice, and am proud to say that it was not based solely on her being a woman of color. I voted for Zeba because she was a woman of substance, intellect and has a broad base of knowledge.

I usually try to shy away from the “we was wronged” game, but if the male wins, I’ll have to wonder: Are the judges and voters so used to glib white guy standard for pundits, that we have no tolerance or acceptance for anything else? Can’t wait for the results!!
Posted by Unknown at 4:34 PM No comments: Links to this post