Reach Out and Touch! 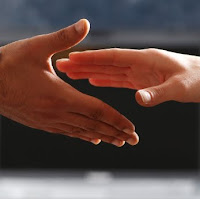 In my training and coaching, I talk a lot about nonverbal communication: body language, gestures, facial expressions and vocal tone. However, there is one we tend to overlook—physical contact.

In a New York Times article by Benedict Carey, the author notes that researchers have discovered “momentary touches...—whether an exuberant high five, a warm hand on the shoulder, or a creepy touch to the arm— can communicate an even wider range of emotion than gestures or expressions, and sometimes do so more quickly and accurately than words.”

Interesting, huh? The fact is that 40% of the population is most comfortable using a kinesthetic learning channel; which means they communicate more effectively through touch as opposed to sight or sound. Touch, the article explains, is the first language we learn. No wonder it holds so much sway! Messages communicated through touch can immediately affect the way people think and act.


“Students who received a supportive touch on the back or arm from a teacher were nearly twice as likely to volunteer in class as those who did not. A sympathetic touch from a doctor leaves people with the impression that the visit lasted twice as long, compared with estimates from people who were untouched.”

The Definitive Book of Body Language also notes that just brushing someone’s hand can create rapport and increase positive feelings and a light tap on the elbow has been found to increase a person’s chances of getting what they want by 3 fold.

Of course, in the age of sexual harassment suits, no one’s suggesting you go around caressing and embracing everyone you meet or work with. However, think about adding a light tap on the elbow, a brush on the hand, or a light pat on the back to your communication. It can make a real difference in the way people perceive you, relate to you, and respond to your requests.