Presence... Maybe You're born with it, Maybe it's Maybelline! 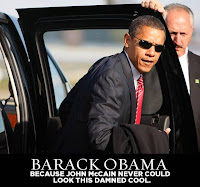 Do you ever have the feeling that people are looking over you, behind you, around you - everything but AT you? Do you ever long to walk into a room and be that person everybody notices? Do you ever yearn to be the person at a meeting that everybody listens to? Whose ideas are almost always acknowledged even if they aren’t acted on? If so, you might want to work on developing a more powerful presence! I am very proud to say that having a powerful presence is one of my strengths and I’m passionate about helping others develop theirs. For the next few posts, I’ll be talking about the power of presence and how to achieve it.
Can you develop presence? Aren’t you just born with it?
You remember those Maybelline commercials? “Maybe she’s born with it or maybe it’s Maybelline.” Well, I’m an avid believer in mascara. Rarely leave home without it. And when it comes to presence, like thick eyelashes, if you weren’t born with it, I believe with enough “Maybelline” you can look like you were.
I often talk about how I was a painfully shy child and adolescent and how I overcame that through my pursuit of acting. My very first role as an actress was in an experimental play called The Infernal Machine by Jacques Cocteau. I played the character of the Sphinx – the character was described as: “the most mysterious criminal of all times” “the enigma of all enigmas”, “the human monster”, “the bitch that sings”
For a shy 14 year old who had just taken the biggest leap of her life by spontaneously auditioning for “a” role in a play at the boy’s school down the street,  reading that description was quite a shock. But I was determined to change my personality so I decided to go for it. The “hippy” male director pushed me, cajoled me and humiliated me into creating a presence with the Sphinx. But, the truth is, each time I pushed myself to speak a little louder, stand a little stronger, unleash more emotion, I felt fantastically present. I truly believe that being cast in that role at that time altered the course of my life. And that is why I know presence can be learned. Next week, I’ll talk about what a powerful presence is.
Is there something in your life that affected your personality? Tell me about it.
Posted by Unknown at 12:13 AM 3 comments: Links to this post